Norma Hrovat, Bob Ashley and Carolynn Ploch proved there is strength in small numbers when the Holy Spirit is present.

The trio at Immanuel Lutheran Church in LaSalle County, Ill., — known as the county line church — were the quilt-producing engine of the small, country-church congregation. Despite an average age of 83 between them, they cranked out about 250 quilts a year, which is the equivalent of nearly one quilt every work day.

Norma says she and Carolynn were motivated by their dear friend Bob’s tireless production of quilt tops.

“We tried to keep up and do so many because Bob was doing lots of tops, so we kept trying to increase,” she says.

Bob recently passed away from cancer. He was still sewing up until the last couple weeks before he died.

“When he first started, he didn’t know anything about what he was doing!” Norma says. She also says that his wife had a machine but didn’t want him messing it up so she got him one of his own. 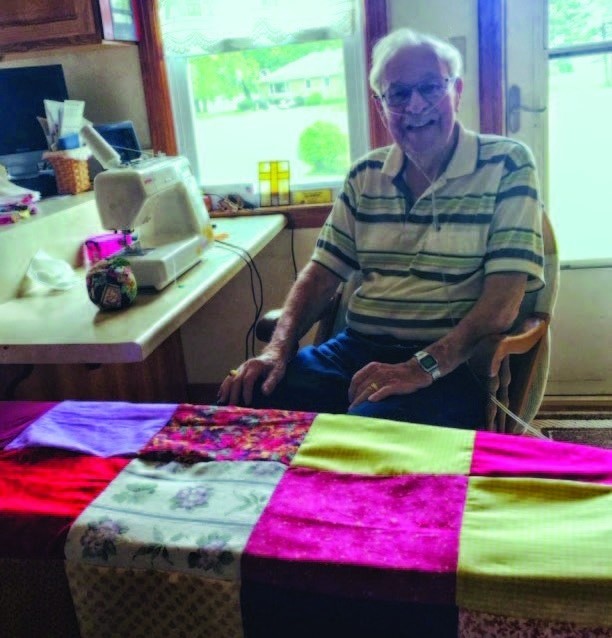 Bob Ashley sits at his sewing machine, where he made quilt tops as part of a 3-member quilting team at Immanuel Lutheran Church in LaSalle County, Ill.

Bob would sew at home and bring the tops to Norma and Carolynn, who would finish the quilts and make more tops and bottoms. The system worked, even when Bob was in Florida, where he and his wife, Emma Lou, live part of the year.

Norma and Carolynn know his death leaves a big gap in their little team and in a church that began providing quilts for Lutheran World Relief in the 1960s.

They will continue making quilts for Lutheran World Relief and other organizations, as well as LWR Kits of Care. So far, they have assembled 45 School Kits and 16 Baby Care Kits in addition to the 142 quilts they have finished. And Thrivent has also supported them immensely by providing gift cards they use to buy batting for the quilts and materials for the kits.

“It makes you feel good … It just gives you this feeling. You want to help, that’s all,” says Norma.