The Ability to Transform

LWR has a long history of development programming aimed at building the resilience of vulnerable communities affected by multiple shocks and stressors, such as natural disasters, conflict, and climate change and variability. This blog series, Reflections on Resilience, will examine emerging issues, innovative approaches and new resources in resilience work. It seeks to stimulate learning, reflection and dialogue among development practitioners, researchers and decision-makers interested in the linkages between resilience and development practice. Read parts one, two, three and four.
It was almost 6:00am, and we had been on the road for a few hours. The sun was finally rising. I rolled down the window, so I could feel the crisp morning air on my face. The fog had started to lift, and to unveil the green, lush mountains of Nicaragua, as we approached a small town called San Juan de Rio Coco.

We made our way through winding roads and coffee fields, and I was looking forward to the day ahead: spending time with agricultural producers to better understand the effects of climate change and variability on their livelihoods, and their ‘resilience’ to those effects.

This is an increasingly relevant issue for small producers located along Central America’s Dry Corridor, who have been experiencing food shortages as a consequence of ongoing drought linked to El Niño.

LWR has a long history of working with agricultural producers, more recently as part of a regional project that is exploring the resilience of coffee producers, that is, their ability to cope with, adapt and potentially transform in face of the shocks that they constantly face (e.g. the effects of coffee diseases, price fluctuations, food insecurity).

While there are many technical definitions of what ‘resilience’ means, I have never understood it better than the day I spent in San Juan de Rio Coco.

As we arrived to the community, we were greeted by our local partners from CAFENICA, and introduced to a group of agricultural producers that had travelled a long way to meet us. It was humbling to know that they were there to share their knowledge and experience, and to get to know us better.

Each of the members of the team (LWR representatives, local youth promoters, and researchers from the University of Vermont) was assigned to a producer, to conduct a survey interview. I was introduced to Don Alfonso. We pulled two chairs and sat down in the balcony, overlooking the small streets that were buzzing with people and street vendors.

We chatted for a bit. I told him about the research project that had brought us to San Juan, and mentioned how much the green mountains that surrounded us reminded me of Colombia, where I was born. We started going through the questionnaire: he told me about his farm and the types of crops that he and his family grow, about the techniques that he applies to protect the coffee trees from pests, about how in the last few years the weather has been unpredictable and ‘crazy’. He also told me about the devastating effects of the drought, and the ‘hungry’ months that small producers are increasingly facing each the year.

We concluded the formal interview, but stayed there, talking for a while longer. Don Alfonso told me how he had been drafted to the army when he was still a teenager, and for many years was involved in the civil conflict that took place in Nicaragua in the 80’s. When the conflict ended, he went back to his community and became a farmer, starting with a very small plot of coffee that he was worked very hard to expand, and that now diversifies with corn and beans to contribute to his family’s food security.

I reflected on his words, meanwhile he took a sip of coffee. His eyes wondered in the mountains ahead.

Being resilient is not only about the ability to implement agro-ecological practices, test new technologies or diversity livelihoods. It is not only about ‘surviving’ shocks. More broadly, resilience is about having the ability to navigate change, to overcome adversity, but also about being able to transform. Don Alfonso’s life journey was an amazing example of that capacity.

I asked him if he was familiar with the concept of ‘resilience’. He paused for a moment, and said:

“Well, yes, that is what we are trying to do. We are trying to improve our quality of life. Without that hope, without working towards that, we would be worse off. Resilience is very important so we can respond to the problems that we face…But it is a struggle, is a long-term process”.

I could not have explained it better, more eloquently, in a more heart-felt way, that Don Alfonso did.

As LWR continues its work in the resilience field, more recently with the publication of the agency’s Resilience Approach, the conversation with Don Alfonso emphasized the importance of the ‘human’ component of resilience, a key and necessary complement to the ‘technical’ approaches.

Technical aspects make little sense unless they are relevant and applicable in development practice. For the communities that we work with, resilience is about hope, about perseverance, and about long-term partnerships. It is about having the ability to transform. 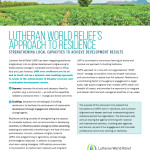 LWR has a long history of building the resilience of vulnerable communities. Oftentimes these communities are affected by multiple shocks and stressors, such as natural disasters, conflict, and climate change and variability.

We work in close collaboration with a broad set of stakeholders — including donor organizations, peer agencies, local partners and academic institutions — to continuously learn, innovate and strengthen our approach to resilience.

To learn more, download a copy of Lutheran World Relief's Approach to Resilience.