Sustainable rural development in the Colombian countryside that reduces poverty and promotes the inclusion of women and youth will be key to achieving and maintaining peace in Colombia, according to a new report issued by the international humanitarian organization Lutheran World Relief.

Basing its insights with consultations with LWR’s local partners in Colombia, Voices from the New Countryside: the challenge and opportunity of peace in rural Colombia, examines both the challenges in pursuing inclusive rural development after five decades of civil war and some promising positive developments that should be expanded.

Rural development plays a central role in the peace deal between the Revolutionary Armed Forces of Colombia (FARC) rebels and the government of President Juan Manuel Santos. A peace “dividend” for what the agreement dubbed the New Colombian Countryside (Nuevo Campo Colombiano) is considered a key step in responding to the needs of long-suffering rural inhabitants and returnees among the 6 million people who have been displaced by the long-term conflict. This new model of rural development has been a shared priority by both parties to the deal.

Voices from the New Countryside draws on the experiences of a number of LWR partners and civil society groups that gathered at a 2015 conference in Bogota, Sustainable Practices in Rural Development, which was sponsored by LWR. Among the findings:

Family agriculture will be critical to the New Countryside. Nearly 70 percent of Colombia’s farms are less than five hectares, and agriculture is the principal source of food and employment for those living outside of cities.

Women’s roles in civil apolitical and economic life must be protected and promoted. Women account for one quarter of family farmers in the country, and they must balance their agricultural activities with time-consuming responsibilities in caring for their families. Easing the domestic burden can pay dividends in the production and business of small farms.

To keep the family farm alive, young people need support and incentives. Farming is a graying profession. In Colombia, the average farmer’s age is over 40, while only 10 percent of youth under age 24 have taken it up. Youth leaders say they want to move from being beneficiaries to real leadership roles, and recommended incorporating innovation and technology to attract more youth.

Colombia cannot postpone a more equitable distribution of land. About 6.5 million hectares of land were abandoned or seized, largely from family farmers, by state-affiliated or other armed groups over the past 30 years.

Investments in the New Countryside should focus on improved and sustainable livelihoods for the poorest and most vulnerable families. Historically, the state has often concentrated governing resources in urban areas and promoted large-scale agro-industry and extractives in the countryside. There should be a substantial investment in state structures and services including education and practical research that will benefit families in poor rural communities.

Effective, transparent and responsive government institutions, especially at the local, municipal level, will be essential to an equitable distribution and effective use of resources for reconstruction and a “peace dividend” for those who suffered most during the conflict. Corruption at the local level will threaten such development initiatives. LWR has experienced this first-hand.

The report concludes with a series of policy recommendations for the U.S. government, including support for the pace process; continued financial support in line with the Colombian government’s priorities; advise and assist local peace and development processes; and support  and protection for human rights defenders. 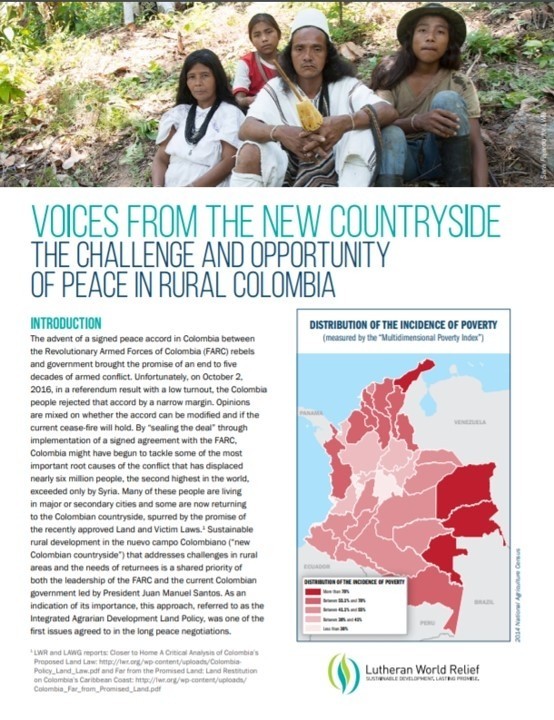 Download the LWR Report, Voices from the New Countryside.