Philip Bidal, 17, and his grandmother, Acii Paulina, who is in her 80s, are refugees from South Sudan living in Palabek Refugee Settlement in northern Uganda. They received improved seeds and agricultural training from Lutheran World Relief to help diversify their diet and increase their income. (Photo by Jake Lyell)

Hunger or coronavirus: an impossible choice for refugees in Uganda

Acii Paulina doesn’t know exactly how old she is.

All she knows for sure is that when the first Sudanese Civil War broke out in 1955, she feared most for her young children, who were still small enough to be carried in her arms.

Life was not easy before the war, but in the six decades since the fighting started, Paulina has endured more suffering than most people can imagine — the tragic deaths of countless family members and friends to war and sickness, bouts of deep poverty and wasting hunger, and the loss of her home, to name a few.

Three times she has had to run for her life to seek refuge in Uganda, where she now lives in a tiny mud hut in a refugee camp. This time, she says, there’s no going back to her war-torn homeland.

Instead of being surrounded by her small children, now she has her teenage grandson Philip by her side. Philip’s parents died during the second Sudanese Civil War, and Paulina insisted he come with her to Uganda because she feared rebel soldiers would either kill him or force him to join their ranks and kill his own people.

Together, grandmother and grandson fled to start a new life. 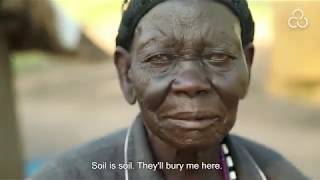 After surviving a life of war, COVID-19 threatens

Paulina and Philip have no running water, so Philip goes to the community tap daily to haul water for drinking and washing. For food, they grow a few vegetables in a tiny garden next to their hut, which is only a few feet away from their neighbors'. Whenever they have any produce leftover, Philip takes it to the crowded street market to sell. This is their only income to buy what they need to survive.

Over time, as they cultivated their tiny plot of land and established roots, Paulina and Philip began to feel secure in their new life and routine. But now, a new threat is pressing. Every time Philip ventures to the market, he knows he risks being exposed to COVID-19 and bringing it home to his grandmother. With her fragile health and advancing age, her risk of death is high.

But the choice is impossible: how can they choose between going hungry or getting sick and dying?

Reaching neighbors at risk of coronavirus

Your gift to Lutheran World Relief will deliver urgent support to people like Paulina and Philip who are facing impossible choices as the coronavirus pandemic continues to advance across the globe.

Your love will rush masks, soap, emergency food, access to medical care, handwashing stations and more to families with no defense.

You’ll also provide seeds and tools so that families can grow more of the foods they need to survive.

Though Paulina and Philip face impossible choices, you can choose to ease their burden and change their lives by extending your love to these neighbors in their time of need.

Please give what you can today, and help ensure all God’s people receive the lifesaving care they need.

Until your love reaches every neighbor.