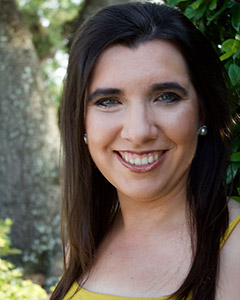 When reflecting on her calling, especially amid the challenges of navigating life during the global coronavirus pandemic, Eve Noelle Hildebrandt tries to remember C.S. Lewis’s call to become a “little Christ” in everything she does. For her, that includes the way she lives into her roles as a wife, homeschooling mother of two, small business owner and fiber artist.

When COVID-19 began making its way across the world, it didn’t take long for her to decide that the best way to be a little Christ and serve her neighbors in need was through her art.

Imaging God through creativity and generosity

Under her grandmother’s tutelage, Hildebrandt learned how to crochet when she was about four years old. Her mom taught her to knit when she was in her teens, and since then she has also picked up designing patterns and centuries-old techniques of dyeing, weaving and spinning. She has worked as a professional costumer and occasionally does liturgical weaving for churches, handmaking paraments and stoles.

“I have always loved crafts,” she says. “And I think it’s wonderful to carry on an old craft; to know people have been doing this for thousands of years is so cool in my mind.”

Today she owns and operates Holly Dyeworks, the part-time small business she started to sell yarn she dyes by hand. (Learn more and follow her projects on Facebook and Instagram.) It was through Holly Dyeworks that she designed a sock-weight yarn set, in a purple and green colorway she calls “The Peace that Passes All Understanding,” to raise money for Lutheran World Relief’s global coronavirus response.

The set was so popular that the first batch sold out, so — when her two young sons were visiting with their grandparents — she set to work dyeing another. Hildebrandt believes the response to her fundraiser was so strong because people have been looking to support small businesses during social distancing, as so many are vulnerable to shuttering. She also sees how some customers want their purchases to contribute something positive to the cause, even if it’s small — like the 25% she’s able to donate to LWR. She sees others still are looking for a creative outlet to help them find peace during a time of turmoil.

“There has definitely been an uptick in people desiring handwork they can do at home — work that feeds the creative,” she explains. “Plus, knitting and crocheting are art forms that people can use in the end. You wear your scarf; you can donate an afghan. So there’s a practical use to it, it feeds their creative soul and it’s therapy.”

And, she would argue, it’s also a form of worship. “The first image of God we’re given is the Creator,” Hildebrandt says, “not, say, the Savior or Conqueror. That means creativity is one of the most basic ways we can be in the image of God.”

Hildebrandt calls herself a “cradle Lutheran” — she was born and raised in Lutheran churches. Currently, her father is the pastor of Cross of Christ in Chattanooga, Tenn., and her husband pastors Christ Lutheran in Pascagoula, Miss.

Choosing Lutheran World Relief as the beneficiary of her fundraiser was a no-brainer.

“Lutheran World Relief has a fine reputation across the world,” she explains. “I have always been a part of churches that have given to LWR, especially during crises. When this virus hit, I wanted to do a fundraiser through my business and raise some awareness. I couldn’t think of anybody I’d rather give to than LWR.”

Around the world, your gifts to LWR are providing clean water for neighbors living in vulnerable areas to drink and wash their hands — a first defense against COVID-19. You are delivering emergency food to families living where market shelves are empty. And you are equipping health workers with the protective gear they need to stay healthy and getting health networks accurate, up-to-the-minute information about COVID-19 and what to do to stay safe.

Thanks to Hildebrandt and other generous donors, LWR is able to reach more and more neighbors in need during the challenges of COVID-10. With your support, we’ll keep going… until your love reaches every neighbor.

Get updates delivered to your inbox.

This unprecedented global crisis is growing rapidly.
Sign up for updates to learn how far your compassion reaches.