October is Fair Trade Month, and we want to lift up one of our long-time Fair Trade partners: Equal Exchange.  In their honor, every Tuesday we are sharing the stories of farmers whose lives are changed by your faithful support of Fair Trade. This week hear the stories of Victorio Vasquez Morales and Carlos Romero Velazco, coffee farmers in Mexico.

In the early 1990s, coffee farmers in Chiapas, Mexico had no choice but to sell their harvest to local predatory middlemen known as coyotes.  These coyotes dictated the price they paid the farmers, and as the only people with vehicles in the area, they often charged exorbitant rates to transport the beans out of the mountains.  The farmers decided to end their reliance on the coyotes by joining together to form a cooperative called CESMACH.

Victorio, a founding CESMACH member, recalls: “Bit by bit, we got some loans for technical assistance and we were able to hire some staff.” It was slow going and then, suddenly, a large coffee company from the U.S. offered CESMACH an exclusive contract to purchase all of their organic coffee.  The farmers were jubilant.  Their years of persistence and hard work had finally paid off.

Unfortunately, their relationship with the buyer quickly soured.  “They began telling us how to run our business, where to store our coffee, and where to process it,” Victorio told us,  “We didn’t think that was right; we tried to say to them, ‘you run your company and let us run ours,’ but they were insistent on having us follow their rules. It was a very hard decision, but in the end we decided we had no choice but to stop working with them.”

Carlos, founding member and CESMACH president, said: “In 2005, after we ended our relationship with that coffee company, we sent out a press release to Fair Trade  coffee companies in the US stating that we were looking for new buyers. It was a huge risk – we didn’t know anything about coffee buyers because this company had been buying our entire production.” Equal Exchange jumped on the opportunity, went down to CESMACH to sample their coffee and meet with the co-op, and decided to purchase about 60% of that year’s harvest.

Since then, Equal Exchange’s relationship with CESMACH has grown, developed, and flourished.  Equal Exchange continues to respect their agricultural and business practices, and is always impressed by their organization and commitment to protect the UN-designated biosphere in which their farms are located.  Most importantly, CESMACH has kept their hard-won control over their business, while they build stronger, mutually-beneficial relationships with their buyers. Victorio says, with pride, “Today, we know all of our clients personally, and we talk to them directly.”

This is how your purchase of Fair Trade coffee makes a difference in the lives of those we are called to serve around the world. The work that Victorio and Carlos do in their community is made possible by your congregation’s witness to Christ’s love by serving and selling Fair Trade coffee. Come back on Thursday to see how LWR staff are using Fair Trade products from the LWR Coffee Project for fun and delicious recipes! 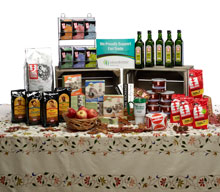 Post a picture of your congregation’s coffee hour or Fair Trade Coffee sales on our Facebook page. We will draw one congregation’s name at random who will receive a $250 gift certificate from Equal Exchange to upgrade your coffee hour.