Out of the limelight, tiny Dominica slowly recovers from Hurricane Maria

Last September, the world watched in horror as Hurricane Maria swept through the Caribbean, leaving an alarming trail of destruction in its wake. Most people are aware of the impact Hurricane Maria had on Puerto Rico, wiping out the power grid and leaving thousands of people homeless. However, many smaller island nations in the Caribbean were equally devastated  and were quickly forgotten and largely left to fend for themselves.  One of those countries is the small island nation of Dominica, a mountainous Caribbean country with a total population of about 73,000, 400 miles off the coast of Puerto Rico. 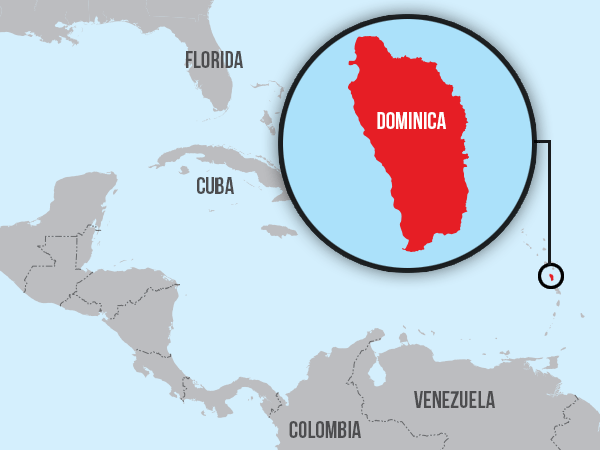 Dominica is no stranger to damaging storms. In 2015, Tropical Storm Erika claimed more than 30 lives and caused damages amounting to half of Dominica’s GDP. However, Hurricane Maria inflicted an entirely different level of destruction. Approximately 90 percent of the country’s 26,000 houses were moderately damaged or worse, and nearly a quarter were destroyed. It wiped out agriculture and tourism, the cornerstones of the economy. With support from the humanitarian community and neighboring Caribbean nations, Dominica is slowly starting recover, but there is still a long road ahead.

"Everything has to go fast"

Shortly after Hurricane Maria hit, Lutheran World Relief connected with Habitat for Humanity International to collaborate on a project that would support that monumental task of rebuilding the island. We quickly found that a shortage of skilled carpenters and construction workers on the island was going to be a major impediment. Our local partner Habitat for Humanity came up with the idea to partner with the International Organization for Migration (IOM) to recruit skilled builders from other Caribbean nations such as Trinidad, Guyana and Jamaica to come to Dominica and help train Dominicans on hurricane resilient construction. Since April, about 40 skilled workers from these countries have been working alongside local workers. “Bringing in foreign workers was the only way to accelerate and expand our roof repair program. Everything has to go fast, because the 2018 hurricane season started again in June,” says Jan-Willem Wegdam, team leader for IOM Dominica.

Last week, Lutheran World Relief staff traveled to Dominica to meet with our partners to learn about the recovery process. Nine months after the hurricane struck, scars of the disaster are visible everywhere you look: houses missing roofs, telephone poles slanted at precarious angles, boarded-up windows, piles of rusted household appliances discarded in massive piles at the side of the road. Construction and cleanup efforts continue, supported by government initiatives and humanitarian organizations.

We visited construction sites and spoke with IOM workers who have participated in trainings delivered by Habitat for Humanity and supported by LWR. Natasha Daniels, Habitat for Humanity’s Project Coordinator in Dominica, spoke to us about how the project has worked to overcome challenges by establishing partnerships with other humanitarian organizations.

“We realized that most of humanitarian organizations were struggling to find skilled labor in Dominica,” she says. “Habitat for Humanity has a presence in the Caribbean, thus allowing us to easily recruit and deploy experienced builders willing to help, who could lead local teams in roof construction. We call this ‘learning by doing.’”

The project provides opportunities to anyone who is interested in giving back, regardless of barriers like gender or lack of previous experience. We visited a team a team of six workers outside of the town of Marigot, led by Reneeta Seepersad, 33, who was deployed from Trinidad. Her team is composed of two women and three men.

“When I learned about this opportunity, I was so excited about the chance to give back,” she says with a wide smile. “I love carpentry work and my team here is ride or die. We work well together.”

Reneeta is a clear leader who commands her team’s respect. They have a healthy competition going with other crews to see who can complete their roofing targets quicker. Sheri Black, 25, from Dominica, has appreciated the opportunity learn from leaders like Renetta. “In Dominica, woman usually don’t work in construction, so being part of the project is very motivating,” she says.

On our last day in Dominica, we attended a festival hosted by the Ministry of Youth featuring young artists performing traditional calypso songs. The festival included an art exhibit with pieces inspired by Hurricane Maria. In the middle of the room stood several panels of twisted tin roofing, presumably the remnants of someone’s roof. The panels held hundreds of notes, alongside a sign: “Tell us the impact Maria has on you. Thoughts? Observations?” Scanning the notes, painful experiences jumped off the dented metal. “After Maria, there was a deafening silence while you desperately tried to find out if your 90-year old parents had survived,” says one. “Took my family” appears in several spots.

One particularly jarring quote jumped out at me.

“Hurricane Maria, she taught us the importance of family, friends and community building. By stripping us of our materialistic needs, we were forced to realize that the abstract qualities of love, kindness, trust and faith were all that we could really rely on. Let’s hope we have learned a lesson.”

Beyond the obvious physical impact, natural disasters can be traumatizing events, especially for young people. In Dominica, the wounds are still fresh as the country looks to rebuild. However, if it’s possible to see a silver lining in the wake of such monumental destruction, it’s that Dominica does have a chance to rebuild a stronger and more resilient country and form tight-knit families and communities in the process.

Over the next few months, Lutheran World Relief will continue working with Habitat for Humanity and IOM to contribute to that process of building a stronger and more resilient Dominica while helping people recover from the losses inflicted by Hurricane Maria.

Noah Steinberg-Di Stefano is a program associate for Emergency Operations & Logistics for Lutheran World Relief, based in Baltimore. He is overseeing the responses to Hurricane Maria in Puerto Rico and Dominica.