This reflection was generously shared by Darcy Huffman, a member of The Lutheran Church of The Good Shepherd in Olympia, Wash, one of the congregations that is directly supporting communities in India through Partnership Bihar. In this post, Ms. Huffman reflects on her experience after visiting the project in January 2018.
Have you ever heard of something called a witness tree?

The Urban Dictionary defines a witness tree as a “solitary tree amid remote or wide open landscape. Usually a witness tree has been around for many hundreds of years and is the only witness to the history in that area.”

In January, my traveling companions and I came across such a witness tree in Pandedih, a remote village in the Bihar State of India. It’s funny how a tree, like a mountain, can capture your heart no matter where it is. 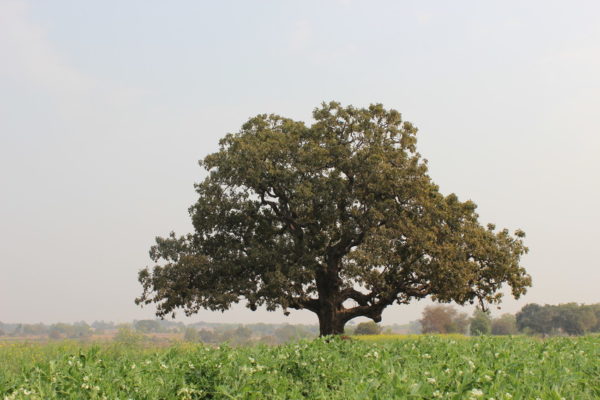 We were in India to visit villages that are part of Partnership Bihar, a Lutheran World Relief that launched in October 2016 with the mission to create year-round food security and sufficient nutrition for 4,000 farming families, or some 20,000 residents. The $1 million project is being funded by 10 congregations in the United States from coast to coast, including my church, The Lutheran Church of The Good Shepherd in Olympia, Wash.

Pandedih was the last of our village visits. In the days before our group had visited two other villages, JoraAam and Kusumdih, each rich and unique in their cultures and their progress in the project for which we were visiting.

But somehow, Pandedih was special for me. Perhaps it was the way they welcomed us into their homes. Perhaps it was the fresh peas they picked for us right from the fields, handing them to us like they were offering us their hearts. Perhaps it was the young woman who insisted on practicing her English with me as she led me around introducing me to every single one of her family members. Perhaps unlike the other villages, it was because the people were more forthcoming of their questions about what our lives were like. It seems that they were just as curious about our lives, as we were about theirs. They wanted to know among other things, if we all had cars, if we grew our own food and if we arranged marriages for our children.

Honestly, I think it was because these women were so sure of themselves and they knew exactly what they wanted from this program. When asked, without hesitation they told us that they want 1) peace in their village, 2) an equal opportunity for boys and girls to go to school, 3) gender equality, 4) enhanced food production for better nutrition and income and 5) to eliminate the need for their husbands to migrate to the cities for work during the non-growing season. Currently about 98 percent of the men in the village are away from home, working in factories for six months of the year.

The social changes in the village have already been substantial. One of the most significant changes is that the women and girls in the village are no longer eating last, thereby getting more food and nutrition. Their families are now eating together, a feat that I pointed out, many of our families have a hard time doing.

Another significant change is the elimination of money lenders in the villages because of the formation of self-help groups. Each self-help group works as a small “credit union.” Each time the group meets (usually weekly) women will bring 10 rupees (about 15 cents) if they are able. They pool this money and then lend it to other women in the group for various needs like medicines, school, or farming supplies. The money is paid back in installments at a very low interest rate.

The men in the village seem most supportive of the changes in their wives and daughters. You could see the pride in their eyes, and in the eyes of their sons.

As I left Pandedih and the witness tree that day, I couldn’t help but wonder what kind of changes the tree would witness in the future. I am confident that with the continued support of Lutheran World Relief and their partners the future of the village is in good hands