In the Mpigi region of southwestern Uganda, village savings and lending groups conduct business much as they do elsewhere.

They meet regularly, members deposit their contributions to their savings accounts and take out small loans. At the end of the saving cycle, they also receive a payout from the collective interest and fees collected.

The only thing that’s missing? The metal cash box where the group’s funds are stored, secured by three separate locks with keys held by three different trusted community members. The multiple locks and key holders ensure transparency and security.

Advantages of the Mobile Wallet

Members of the savings and lending groups who favor the new technology cite two advantages with using the mobile wallet. One is simply convenience. In some of the more rural areas, the local bank is a long and expensive ride away. A mobile connection eliminates the time and expense of physically taking cash to the bank.

“It has provided security to the group,” said Harriet Nakku, 48, of the Nalubugo Credit and Savings Group. “Members can easily access their money with the mobile wallet. Even if someone is far away, you can access it just by entering a PIN.”

But the advantage consistently cited is the increased safety and security offered by mobile banking. A treasurer who keeps a safe box containing hundreds or even thousands of dollars of cash becomes a target for thieves, threatening not just the group’s funds but also the personal safety of the treasurer’s family.

Rose Sengaba, 58, secretary of the Nezikokolima savings group (the name means "even those that crow were eggs at one point"), noted that the box containing the funds of a nearby savings group, totaling more than one million Ugandan shillings ($300), was recently stolen, leaving that group empty handed.

Her fellow savings group member, Immaculate Nakuya, 50, said such security concerns made her and her neighbors immediately receptive to the idea of the mobile wallet. “When they came and talked to us about it, we thought it was a good idea,” said Nakuya, a coffee, bean and maize farmer who is using her savings to finish building her home. “Because it’s not safe to keep money in the home. But if you put it in a bank or on a phone, it’s safe.”

Through your support of LWR we are able to apply powerful innovations in information communications technology to help farm families in Uganda. You are making a difference in their lives by making possible lasting change. 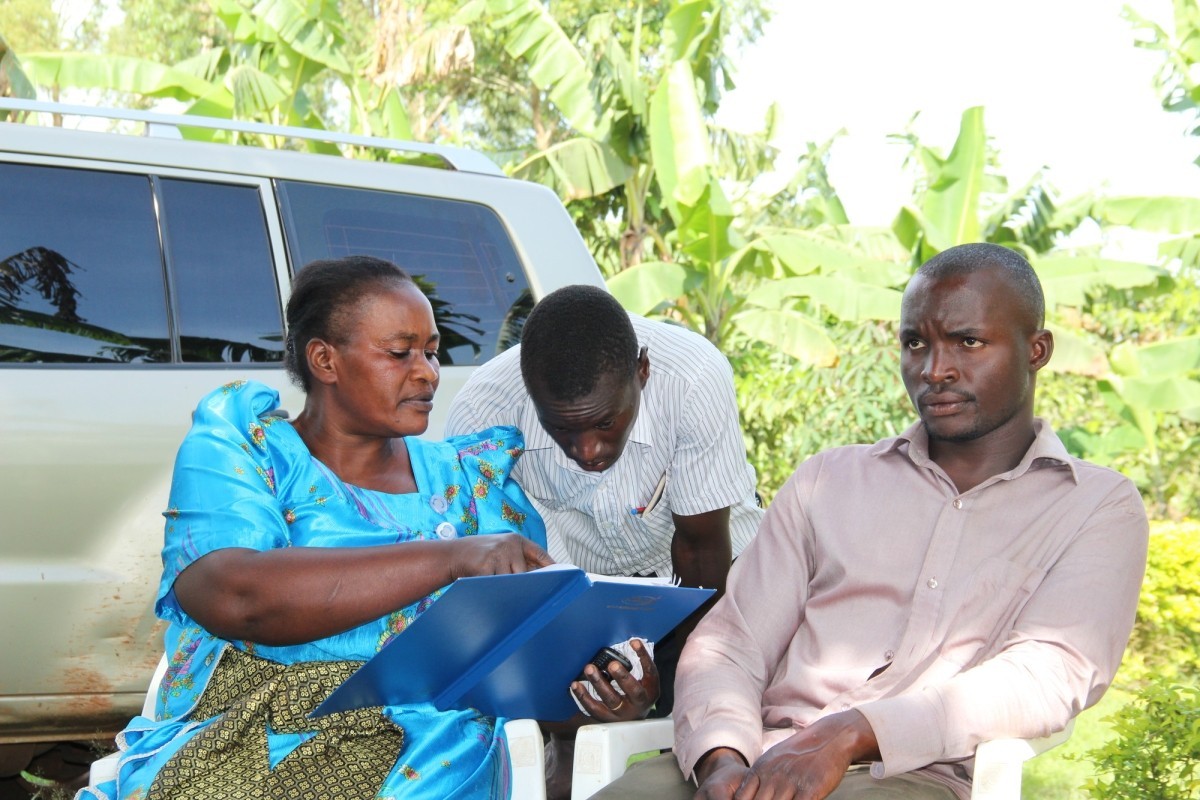 Rose Sengaba, secretary of the Nezikokolima savings group, reviews the group's finances with a fellow member.

These savings and lending groups have gone digital, trading in the traditional cash box for a “digital wallet” to store their funds. Lutheran World Relief Uganda has launched a partnership with Centenary Bank, the leading Commercial Microfinance Bank in Uganda, and Airtel, the east African nation’s leading provider of telecommunications services, to create a mobile group savings solution that provides a secure, convenient, affordable and fast way for savings and lending groups to save, send and receive money. Centenary Bank hosts the groups’ accounts and provides financial literacy services to members. Airtel provides the mobile phone delivery channel.

Mobile banking provides savings and lending group members with an entry point to access formal financial and credit services because it establishes a financial history for the group.

“Manual record keeping means that the group’s rich transaction history is invisible to formal institutions that might be able to provide more financial services to groups, especially if they want loans for agricultural investment,” says Kenneth Barigye, LWR Uganda country director. “The idea is to build confidence with the banks so that eventually they’ll give loans to group members.”

The key to developing a mobile application for savings and lending groups is to preserve the same model of accountability and transparency the groups use with the physical cash boxes. With the digital model, one member holds the phone with the memory card that can initiate a transaction on the group’s account. Instead of key holders, there are three members who must independently enter a Personal Information Number (PIN) to complete any transaction. A completed transaction then triggers a text message, which is sent to three different group members.

Village savings and lending groups are an effective way of financially empowering communities that, because of their remote location or lack of assets, do not have easy access to formal financial services. The groups are typically composed of 15 to 25 self-selected members who meet on a regular basis to contribute savings. By saving more frequently in very small amounts, members can build their savings more easily, and this contributes to improving their assets and the security of their households. The ability to take out loans from the group enables members to make investments in their farms, or pay for other expenses that arise. 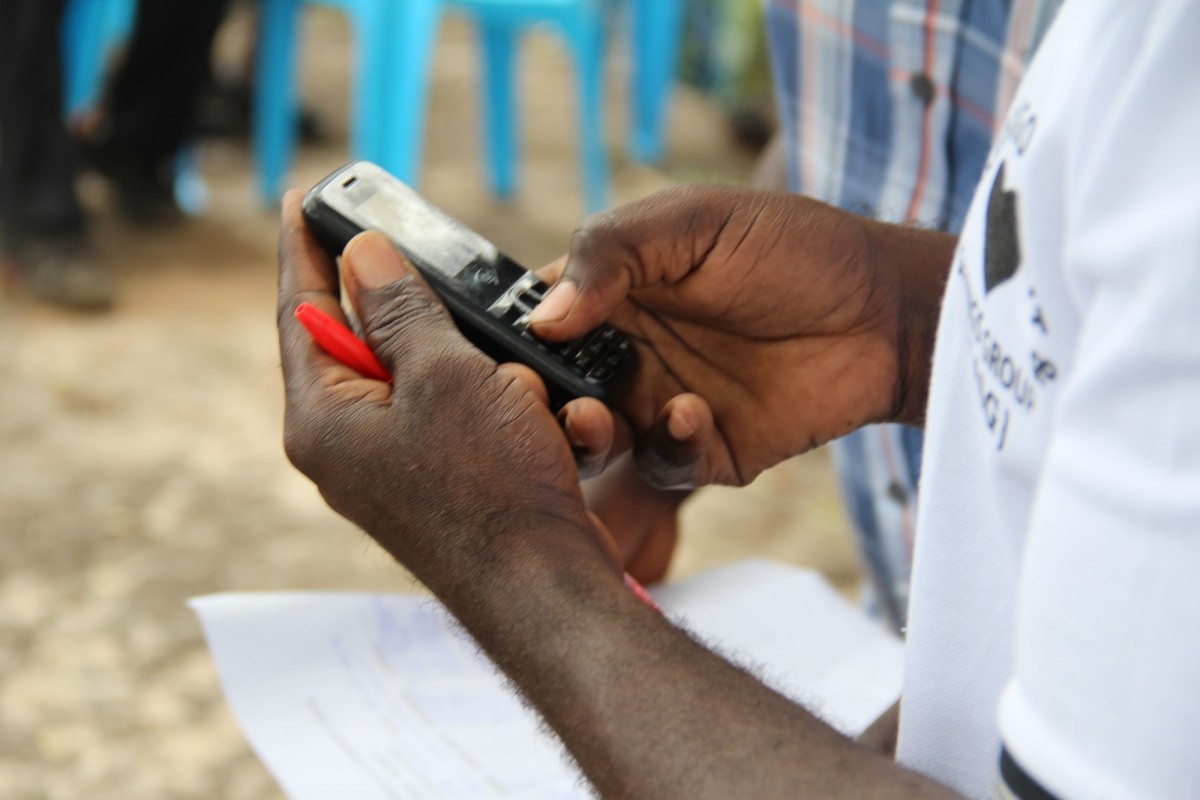 The move to mobile in the savings and lending groups capitalizes on the increasing accessibility and use of mobile technology in Africa, even in some of the remotest areas. A recent Pew Research Center survey characterized cell phone usage in sub-Saharan Africa as pervasive, noting that in some countries, such as South Africa and Nigeria, cell phone usage is as common as it is in the United States. In Uganda, 65 percent of the population owns a mobile phone. And that increased cell phone use has led to the rise of mobile banking. Pew reports that a median of 30 percent of cell phone users in Africa have engaged in mobile banking in the last 12 months.

Still, giving up the traditional cash box for a virtual mobile wallet was a big step for some savings and lending groups. There are varying levels of literacy and familiarity with technology in each individual savings group, and “they tend to be skeptical of every new thing that comes in,” said Ssennoga Hamzai Batiibwe, chief executive officer of the Mbugo Area Cooperative Enterprise, an LWR partner that is spearheading the mobile wallet pilot. “So it was not automatic that they would jump on it. Up to now, some people are still waiting to see how well it will work.”