The Latest on Hurricane Matthew

You can help respond to the devastation in Haiti.
Lutheran World Relief is responding to the immediate needs of people in Haiti affected by Hurricane Matthew, mobilizing emergency relief in collaboration with the ACT Alliance, a global faith-based humanitarian coalition, and local partners. LWR is also making plans to assist farmers in the north whose crops will likely be damaged in the storm.

Please keep our brothers and sisters in your prayers.

O Lord, God of my salvation,
when, at night, I cry out in your presence,
let my prayer come before you;
incline your ear to my cry. 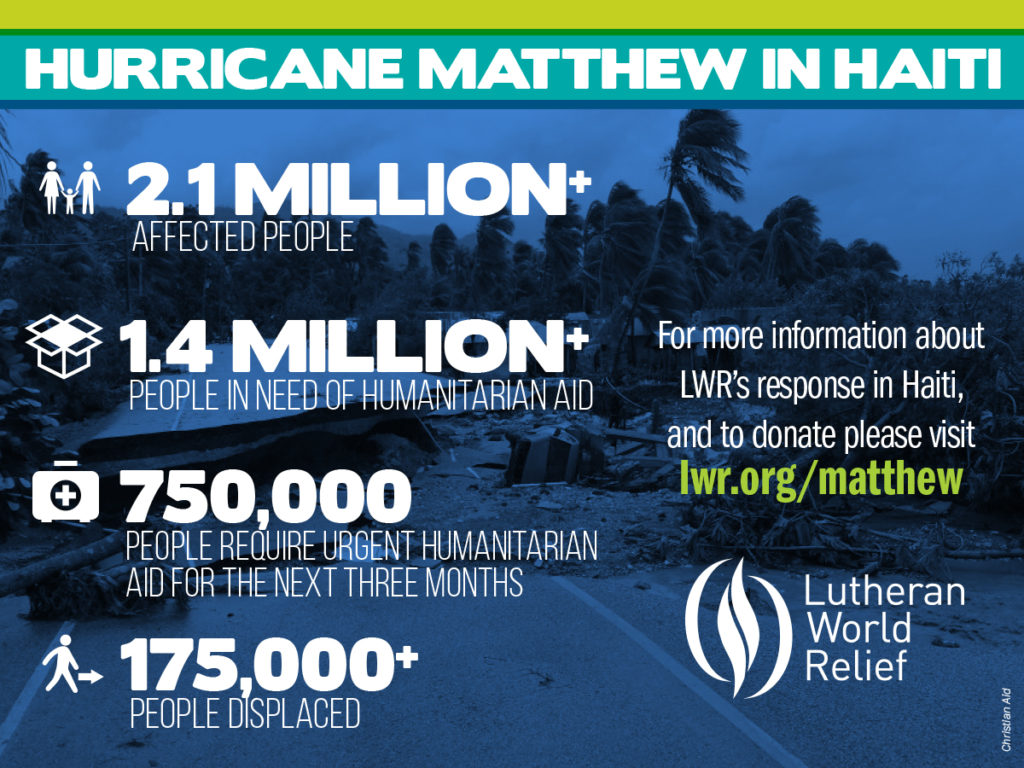 Hurricane Matthew made landfall in Haiti on October 4 as a powerful category 4 storm. The storm brought strong winds, heavy rains and storm surges. These conditions triggered flash floods, landslides and mudflows, endangering lives and leading to extensive property damage. Haiti has struggled to bounce back from the 2010 earthquake, with many people still living in temporary shelters. In addition to the Caribbean, the storm had an impact on the east coast of the United States, particularly in parts of Florida and North Carolina.

Many organizations have deployment teams in Haiti and have begun assessments. Emergency shelter, food and water are a high priority, and disease outbreak remains a major concern. According to the latest Office for the Coordination of Humanitarian Affairs, the government estimates that more than 1.4 million people are in need of humanitarian assistance, which is 12.9 percent of the country. The number of people living in shelters jumped after the storm to 175,509 living in 307 temporary shelters. 806,000 people are at an extreme level of food insecurity and 1,25 million people (including 500,000 children) need access to safe drinking water and proper sanitation.

LWR is responding to the long-term needs of people in Haiti affected by Hurricane Matthew. Our immediate response will reach 16,643 people in some of the most affected areas. As a part of our immediate emergency response we are supporting distributions led by Lutheran World Federation (LWF) and Norwegian Church Aid (NCA) that will reach 10,000 people:

In collaboration with our local partner ADEMA, LWR’s longer term response will focus on food security in the North West through the distribution of seeds, livestock and fishing equipment, and a cash-for-work program to continue the cleaning of roads and irrigation canals.

LWR’s emergency operations are designed to address the most urgent and basic needs of vulnerable communities — including women and children, who are often the most vulnerable — while also promoting sustainable recovery and building resilience to future disasters.