What I Learned Visiting LWR Projects in Honduras

Dr. William J. Craft is a member of the Lutheran World Relief board of directors and is the president of Concordia College in Moorhead, Minnesota. Recently Dr. Craft, along with the entire LWR board, traveled to Honduras to see LWR's work there, especially with coffee farmers. The following is an excerpt from Dr. Craft's reflection on the trip. You can read his full reflection by visiting the Concordia website.
Two years ago, I was very glad to be asked to serve on the governing board for LWR.  Founded at the end of World War II to help the homeless, starving, and destitute in war-ravaged Europe, LWR is best known now for the way it responds to the suffering induced by natural disasters—like Typhoon Haiyan, which struck the Philippines in November of 2013. But day in and out, LWR works far beyond emergency operations.  In particular, LWR staff partner with local farmers around the world to help them grow crops more effectively—both to sell and to feed their own families. This is the work I saw in the steep, wooded hills of coffee and cocoa country at the western end of the country.

Honduras is a place of great beauty, widespread poverty, and all too often, violence, most of it gang and drug cartel ignited. You can read on the LWR website that nearly two-thirds of Hondurans live at or below the national poverty line. The average annual income is $2,180.[i]  For an account of how the violence there threatens the young, see this story.

The Pew Research Center tells us that “the number of unaccompanied minors from Honduras apprehended at the U.S.-Mexico border shot up from less than 7,000 in fiscal year 2013 to more than 17,500 through July of this year, making Honduras the country of origin for the highest number of those minors.” It was that flood of young people from Honduras that heightened the already intense debate about immigration into the U.S.

We spent the first two full days of our trip on LWR board business: setting the direction for a non-profit whose work benefits millions of people around the globe. Once board business concluded, we headed in pickup trucks up, and up, into the hills, on narrow dirt roads around sharp bends—no guardrails, but breathtaking green vistas. What we found atop the hill was a village: homes, individually owned family gardens, and larger hillside plantings of coffee. 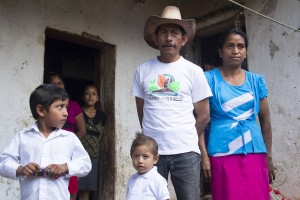 Adam Canan talks with us about three years of training to improve soil quality, farm planning, organic fertilizer making. His wife, Francisca Perez, tells us about improving family nutrition and hygiene—worked in between coffee picking labors that the community shares. 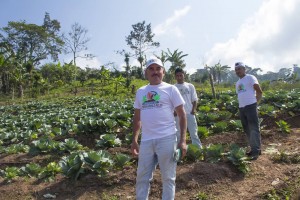 Jorge David Martinez Reyes and his family show us their small but strikingly varied set of crops—cabbages, pineapples, and more. 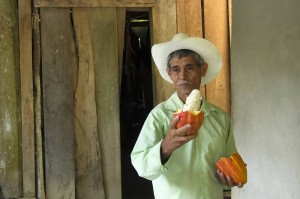 Cecilio Sosa, a father and grandfather, talks us through the growing of cocoa, and then breaks open one of the pods to reveal a milky, gelatinous tower encasing the cocoa beans. We’re all prompted to reach into that tower and try the sweet taste of the pulp. We find out that when the beans are fermented in the pulp, they absorb its sweetness—otherwise they’d be very bitter. 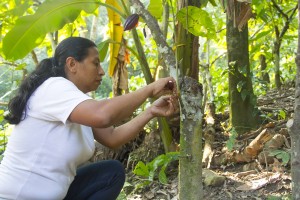 Cecilio’s daughter Maria, a trained and gifted cocoa farming agent, shows us how a poorly producing tree can be given new life by grafting onto it the branch of a more fruitful tree. While I am at the farm with some LWR folk, others are learning how the cocoa beans are fermented, dried, and sold through the village cooperative.

What did I learn on my journey? Too much to tell. But I will settle on two things in closing. I saw very clearly what I had heard about so often at LWR board meetings: this is an organization at once idealistic and tough-minded. Only what works to sustain farmers and families is funded; what doesn’t, isn’t.

I expect that when Concordia students traveled in May of 2014 to coffee and cocoa farms in Nicaragua, they saw the same thing: that the world becomes a better place not merely by wishing it so, but when idealism meets the discipline to solve unscripted human problems with imagination and courage.