How smartphones are improving farming in Uganda

That’s what Bernard Magombe told me when I recently sat down with him on a visit to an LWR coffee project in Bumweru, Uganda.

To be honest, I had mixed reactions to his proclamation. I think of my smartphone as both a blessing and a barrier. It’s a blessing in the convenience and entertainment it provides. It’s a barrier because of how all-consuming these powerful devices can be.

Needless to say, I was intrigued by Bernard’s insistence that his phone changed his life.

Bernard is a young man, just 26 years old. When he graduated from school he was given a small acreage of land in the lush, rolling foothills of Mt. Elgon. This small plot of land came with some wily coffee trees that produced very little coffee. And when they did, the quality was very poor. In fact, many of Bernard’s neighbors cut down their coffee trees to use as firewood.

He and his family — his wife and their three-year-old son and five-month-old daughter — rely on the income from their farm for income. Clearly coffee wasn’t meeting their needs.

But that all began to change, Bernard insisted, because of a smartphone.

The difference a phone can make

When Bernard’s community joined the Gumutindo Coffee Cooperative, he was selected to serve as a Community Knowledge Worker (CKW) — a member of the community equipped with a smartphone to share information with fellow farmers, like weather forecasts, market pricing, composting and crop disease identification and treatment.

Anyone with a farming background knows how important information can be. Even with the right information, you must make decisions in an environment where the outcome is uncertain. My own memories of growing up on a Nebraska farm are peppered with my father’s quest to obtain the best information, consult with his fellow farmers and make a decision that we hoped would yield a bumper crop.

Up until recently, Bernard and his fellow farmers lacked even the most basic information they could use to make good decisions for their farmers. With Bernard’s new role as a CKW, and equipped with his smartphone, farmers have access to many types of information — and the possibilities for more are endless. 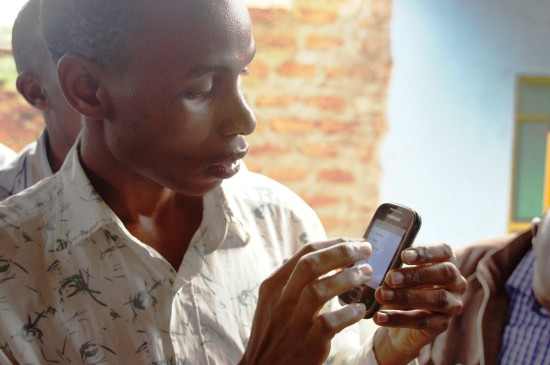 Now each morning Bernard gets up, tends to his own farm and at about 10 a.m. he “hits the road” by foot. His goal is to visit at least 4-5 farmers each day. When he visits, he finds out what questions or problems they are having and uses his smartphone to get information and answers.

"I want to be a modern farmer and a leader"

Where Bernard used to struggle to even produce coffee on his farm, he’s now growing better crops using the information he gets from training and his smartphone. His fellow farmers are also seeing improvements. This new-found information is also inspiring farmers in Bumweru to look to the future.

“I want to be a modern farmer and a leader in my community” says Bernard.

Seeing the smile on Bernard’s face, hearing the pride in his voice as he told me about how he can now support his family, I must say I was convinced. A smartphone really had changed his life!

And you can help change even more lives with your support of Lutheran World Relief. Your gifts make a lasting difference in the lives of people coping with poverty around the world. Thank you for your support!