Portrait of Maryeli Janeth Lopez Chavarria, 22, an outreach promoter of Sustainable Coffee program seen in her house in El Guapinol community, Jinotega, Nicaragua. Her family is a member of Aldea Global cooperative and are beneficiaries of the Sustainable Coffee Program as well. The program has promoted this young women empowerment and leadership by giving her an active roll in the development of her community and of her family.

Want to break the cycle of poverty despite conflict and disasters? Invest in women, new research shows

Investing in women has the potential to transform communities despite food insecurity, unstable governments, a changing climate and a global economy beyond the reach of small-holder farmers. These are the findings from new research into Lutheran World Relief’s long-term efforts to address gender inequities in food security programs, which point to how investments in opportunities for women lead to resilient communities.

“There is a growing body of research to suggest investing in women leads to greater self-reliance for both individuals and communities,” LWR Resilience Technical Advisor Wendi Bevins said. “The hope is that by empowering women we’ll equip everyone to build more resilient communities.”

The new report re-visited 400 families served in Nicaragua by a 2013-2015 pilot program that helped an agricultural cooperative improve its services to farmers. When compared to a control group, the cooperative members that included women in household and farm decision-making indicated greater food stability, allowing those families to better withstand shocks from political or natural forces.

Nicaragua’s political climate has been tenuous at best. Regular blockades and protests once restricted the movement of farmers and commodities, further complicating efforts to break the country’s cycle of poverty. Now military crackdowns have all but stopped the protests.

Nicaragua is one of the poorest countries in Latin America, compounded by a contracting economy and political turmoil.

Efforts to include gender-sensitive programming began in 2012, when Lutheran World Relief focused on improving gender equity among its staff. That led to a review of programming and how gender imbalance is addressed in its development work.

“There was a recognition, when we looked at our agriculture programs, that the majority of our beneficiaries were men,” says Carolyn Barker-Villena, senior director for LWR’s Latin America programs.  “We needed to be more intentional about integrating women into our work and also to address gender inequities in the communities we were working in, particularly among farmer organizations.”

An initial pilot project focused on ensuring farming cooperatives met women farmers’ needs in three countries, including Nicaragua. The pilots ended in 2015, but a new follow up study found women farmers and their families continue to benefit from the cooperatives in Nicaragua that were part of the program, and that household savings is higher than in areas where gender has not been considered.

A grant from the Ford Foundation allowed Lutheran World Relief to validate further its gender integration approach with farmer cooperatives across Latin America.  One of the results of this validation process is a suite of online resources that ushers farmer organizations through an evaluation process of their gender policies and provides guidance for becoming more gender integrated. These resources are open to any farmer organization and are being applied by LWR in programs such as the Starbucks Foundation-funded “Women In New Emerging Coffee Regions in Colombia,” or WIN project.

The WIN project is focused on empowering women in Tolima, Colombia through improved sanitation and greater economic opportunity. The project will strengthen local women’s associations, increase access to finance through micro-loans, and promote women’s leadership in cooperatives through gender-integration training, ultimately reaching 3,000 people.

“We believe women and their families have the potential to empower and transform coffee communities long-term,” said Kelly Goodejohn, Starbucks Vice President Global Coffee, Tea and Cocoa.  “Increasing access to education, economic opportunities and clean water and sanitation is critical to progress the future of women, their families and generations to come.”

Investing in women helps everyone

The latest LWR study also points to the value of including women in farming opportunities. One area of growing research indicates that women farmers are more likely to adopt new methods of best practices in farming.

That is, if women have access to farming resources to begin with.

“It’s not just good for the women,” Bevins notes. “The men’s satisfaction with their farms and their production all improve. Everybody wins.”

“There’s also a business case for doing this,” Barker-Villena adds. “Co-ops get more yields when they integrate women and address gender inequities in how they run their cooperatives. Ultimately, it’s good business for the cooperative and for farmers, which can break the cycle of poverty... for everybody.”

As an organization committed to learning, Lutheran World Relief (LWR) commissioned Global Insights to conduct an ex-post evaluation of our Gender in Production Development and Food Security project in the Matiguás Municipality in Nicaragua. The project was implemented in 2013-2015. This evaluation was conducted in June 2019, more than four years after the end of the project, to assess its sustainability and lasting impact, especially during the country’s political turmoil in 2018. 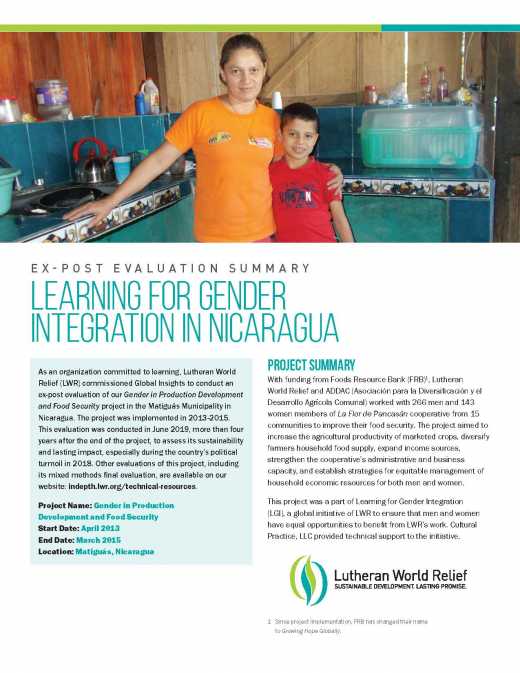